During the early phases of this project, I spent quite a bit of time reading around the internets about prospective homebrew 8086 projects and it seems I am not the first person to have thought of something like this. The appeal is clear: building a microcomputer based on such a historically significant processor is a very interesting project indeed. 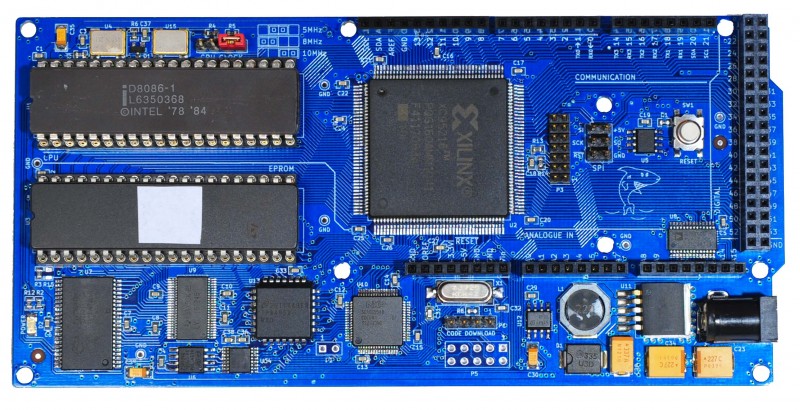 But to achieve it? Well that is quite something else. To give an indication – take a look at this monster, I too constantly found myself reaching for the lesser 8088, with its 8 bit front side bus, this dramatically decreases this physical complexity, or even an 8086 based microcontroller like the esoteric 80186, or completely copping out and walking the path of least resistance: The 80188. At that point I might as well have just built something based on an 8051.

With the easy options relatively historically obscure, and this being purely a project of interest, it had to be an 8086, and to produce it in something that could pass its self off as an Arduino left me with several mountains to climb. 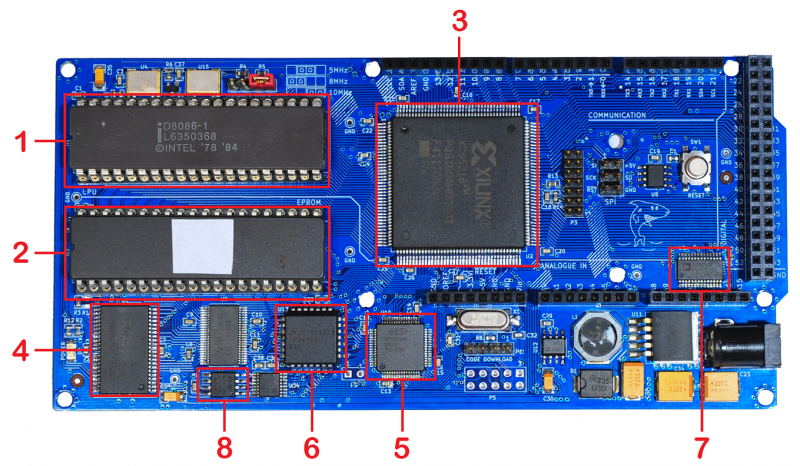 Fortunately for this project, there is still an awful lot of EPROMs in the world.

The EPROM is only used for the bootloader which performs booting/programming of the SPI serial flash chip. There’s nothing to prevent the system from being run entirely from EPROM (my original plan) but in practise, it’s a bit of a pain; as it requires an EPROM eraser, programmer, tube of 27C4002’s, and quite a bit of patience.

The CPLD is the heart of this gizmo, and is the reason it isn’t table mat sized with dozens of logic chips.

Providing (of the features I originally planned):

Some planned features had to be omitted due to limitations of CPLD capacity:

When I selected XC95216 for this design 6 months ago, it was the most suitable for what I was trying to accomplish, and fitted in with the constraints presented. I was also aware that it was end of life, but back then, this project was just a silly thing that was just going to be for me, so I didn’t really mind. Going forward, this could be somewhat of a problem; which thus far, I’ve not decided how I’m going to tackle. Every option I’ve looked at so far either compromises the elegance of the design, or dramatically ratchets up the cost.

A very generous amount of SRAM is included, which is the only writeable RAM the CPU has available to it. The chip I’ve selected is 16 bits wide and 512KB in size, occupying half of the 8086’s 1MB address space.

Because serial communication is pretty important to Microcontrollers, I’ve been generous. This tiny little chip is a 16C554, which is four 16C550’s stuffed in one package. Their interrupts are routed to the CPU, and RX/TX lines to the General purpose headers, all via the CPLD. Additionally, the flow control signals are made available on a dedicated 10-pin header.

The largest change to 8OD.1 was the addition of a dedicated SPI master – TP3465, one of those chips I never thought would exist, and indeed spent a wedge of time learning the existence of.

8OD.0 did SPI with an assisted bit-at-a-time master implemented in the CPLD who’s performance was poor. Even with an FPGA, implementing a competent, good performing SPI master would be a challenge, as SPI has quite a few modes and quirks that have to be supported. TP3465, branding its self as a Microwire master, is a very competent SPI master which thus far has left nothing to be desired. I’d have been in a bit of hot water had it not existed.

An AD7490 from Analog Devices is included which provides the sixteen ADC channels, with the exception that this design is 12-bit instead of the AVR’s 10-bit. One limitation here is that AVRs can re-purpose their ADC pins as GPIO, whereas this board cannot. 8OD.0 was designed to accommodate this but it had to be removed in 8OD.1 to reduce PCB clutter and free up capacity in the CPLD.

1 Megabyte of flash memory is included. More about that here.

The first and second revisions of 8OD had no I2C, because I couldn’t implement anything remotely satisfactory in the CPLD (other than bit-bang) and I didn’t think it’d be possible to cram a dedicated chip on the board either.

After many weeks of toil re-arranging the board I managed to squeeze a PCF8584 hardware I2C master on the third revision of the board, giving it an elegant and good performing I2C solution.

Despite my best efforts, there’s limitations. Most shields should work, but some wont be compatible.

8OD is designed to with an identical header layout to the Arduino Mega 2560 R3.

The Mega 2560 is able to expose a local bus on the 36-pin header – a planned feature for 8OD (with different CPLD build).

Is it fully working?

The largest area of effort has been answering this question. Realising that it was unlikely that I’d get something like this right first time, a single prototype (8OD.0), was built around mid 2014 followed by 4 months verification using the following:

Predictably: 8OD.0 had many defects, thanks mostly to not properly understanding the 8086, as well as trying to jam too much stuff in the PLD.

The current board is 8OD.1 (blue) which fixes all of the mistakes I’ve found in 8OD.0. It is very similar (if not identical) to what will go into production (assuming it ever does…).