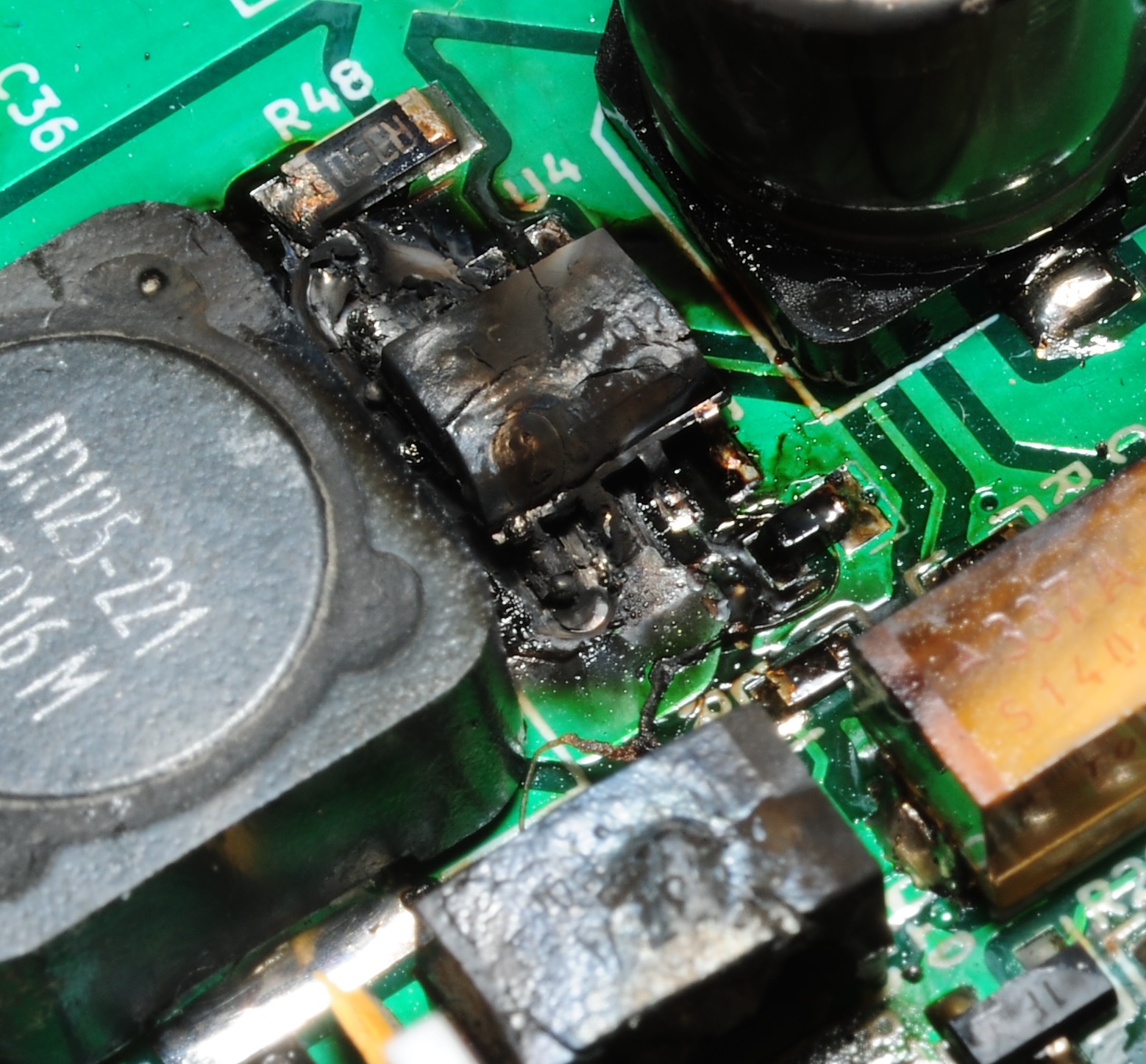 As a keen electronics hobbyist, I have designed some 50 or so PCBs to date. In each instance where a switching regulator is required, I’m typically reaching for one of two options: Where efficiency isn’t important – the trusty old LM2596, or when efficiency is required, I’ll be using a design from Linear Technology with synchronous regulation.

On my last two boards however, for reasons I am myself not entirely sure of (cost perhaps?) I used an MC34063. It’s been with us since the dinosaurs roamed the earth, and is unsurprisingly very primitive. It should have been designated to the dustbin of history, but thanks to the internet and the renascence of electronics in the hobbyist space, it has made an aggressive comeback, and for a simple reason: It’s dirt cheap. 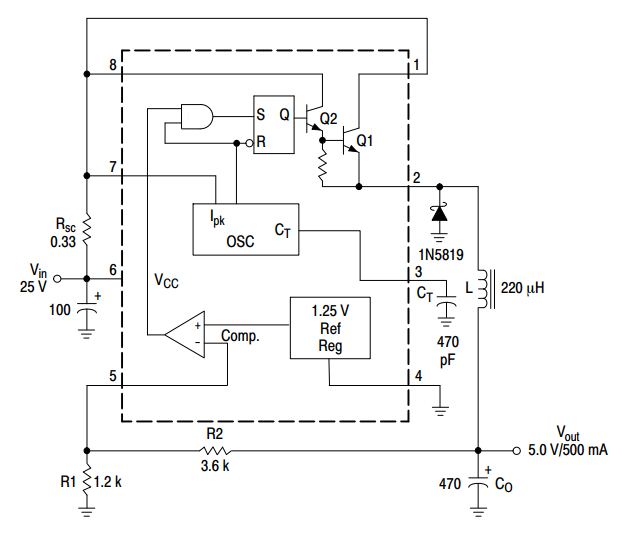 My MC34063 was deployed on the PCB with the above circuit, lifted unchanged from the datasheet. It just so happened that I need 5V at 500mA max, from a 24-28V source. Perfect. What could possibly go wrong?

There is one very important thing we must consider when using this chip: It has absolutely no built-in thermal protection. The above circuit does have over-current protection, but this does not offer any protection from sustained short circuits. In many cases that isn’t a problem, but on this board it was. 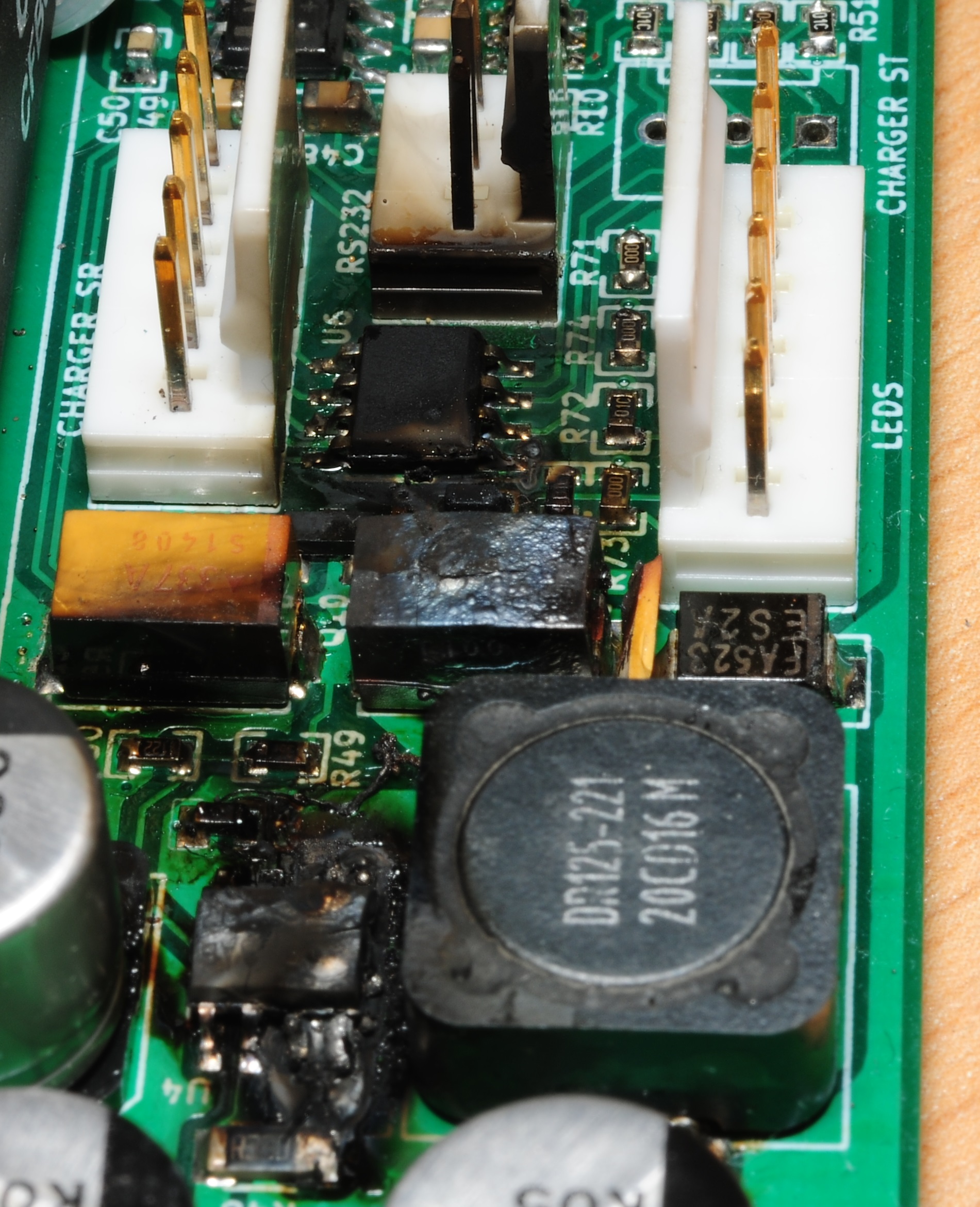 From looking at the photo, we can see that there’s quite a bit of burned out stuff, making it a little difficult to piece together exactly what happened. Fortunately it all unfolded before my very eyes. The problem started with something that was nothing to do with the MC34063. See those two rectangular capacitors?  One of them is particularly toasty indeed.

That capacitor is an AVX “TAJ” series 330uF 10V tantalum. It had developed an internal short circuit which caused the MC34063 to gradually heat up, eventually reaching a point where its internals melted, then becoming a short circuit its self.

Once the MC34063 became a short circuit, the 25V input voltage surged straight through to the 5V secondary, bear in mind that, that voltage is coming from a bank of large lead acid batteries.

Both pairs of batteries were protected with battery fuses, but those were 15A a piece, as this is a very high power setup, also on the PCB was a 30A maxi blade fuse. Surely one of those would have blown? Nope. When silicon melts to the point of becoming a short circuit, there is typically still a few ohms of resistance, which in this case was not enough to blow any fuses. 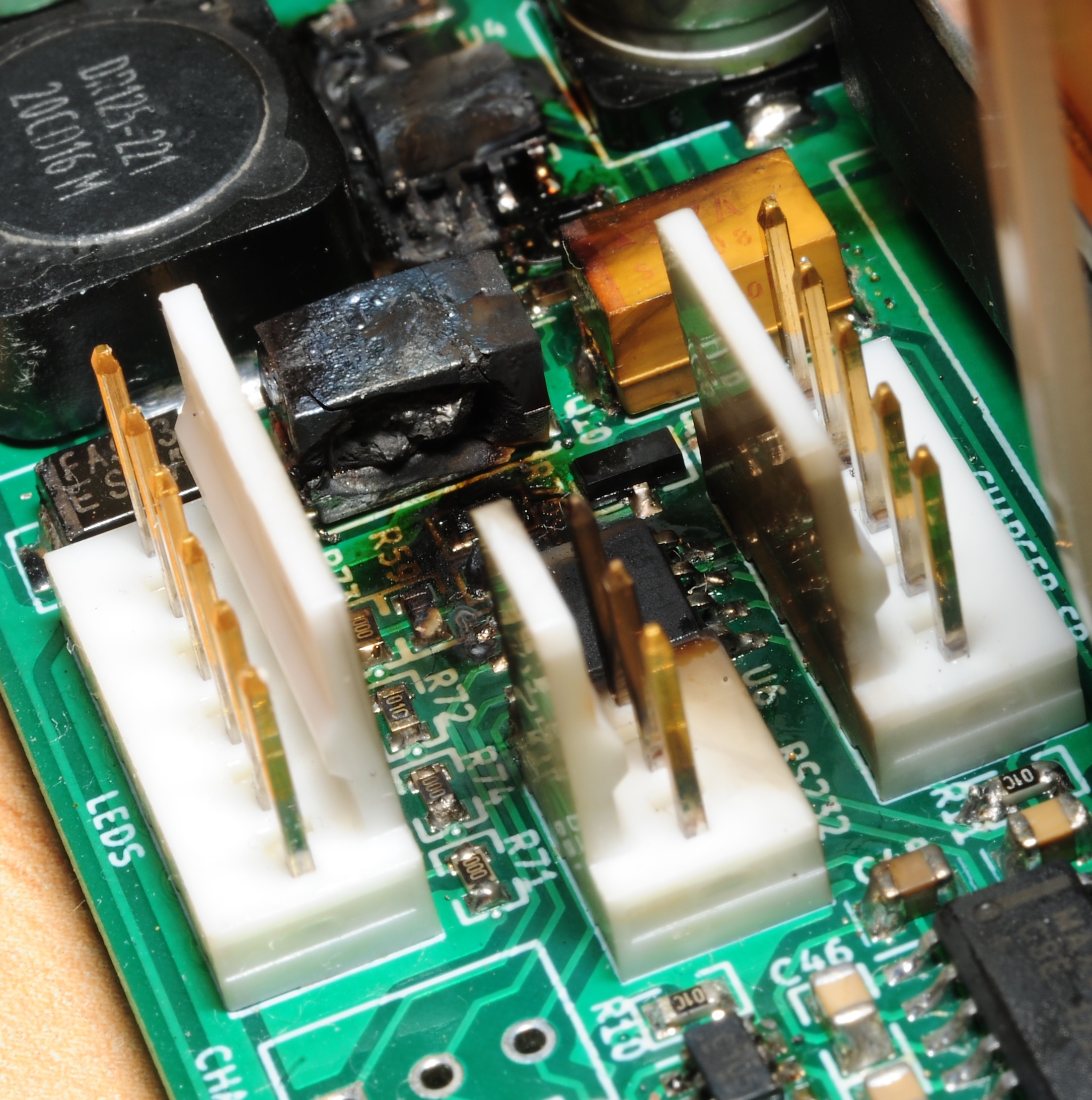 What happens next? BOOM! The short circuiting of the MC34063 unleashed 25V @ ~40A of potential at that shorted capacitor, which promptly exploded, ejecting a significant amount of fire and hot gasses in the process. In the picture you can clearly see the internals of it have become a melted blob of metal, transforming it into a very effective short circuit.

The last phase of destruction was the MC34063 its self burning to a cinder, as it is now the weakest part of the circuit, doing significant damage to the PCB in the process.

It’s at this point that you start recounting exactly what is attached to the 5V rail, because it is likely now toast. The tantalum capacitor must have briefly been open circuit because all 10 ICs fed from the 5V rail were completely destroyed, as well as all of the chips on a second PCB also fed from this regulator, requiring hours of rework to replace them all. Just as well there was nothing expensive connected to it.