Recently while trying to answer this myself, I found a lot of discussion on this subject, but no definitive answer.

M.2 B Key sockets have a variety of possible modes as defined by the NGFF specification: 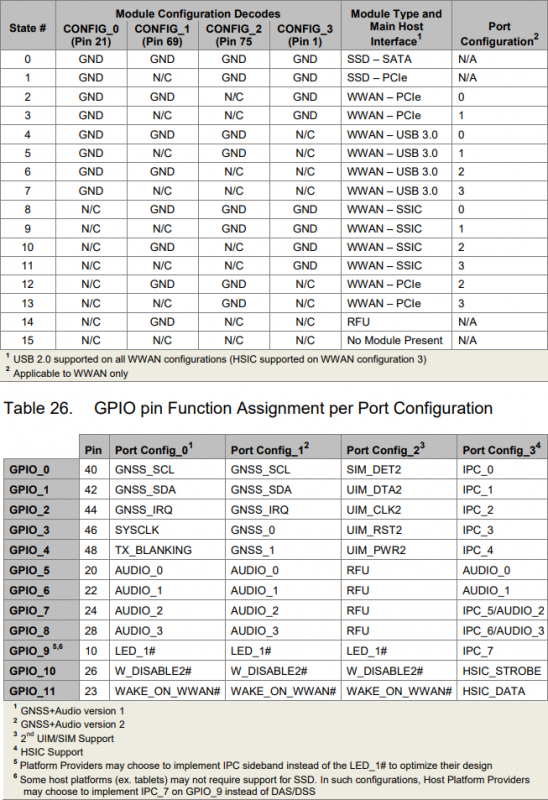 The second to last mode “RFU” (Reserved for future use) is defined by Dell as:

I am unsure what HCA stands for, but have seen it printed on the silkscreen of some of my earlier latitude models. Clearly it is some kind of proprietary device that requires one PCIe lane. It may stand for Host Channel Adapter – Implying some kind of non-NVMe PCIe SSD (i.e. has an Option ROM).

None of this tell us anything about what Dell have actually implemented on thier WWAN slots, neither does their tech support, or any of their documentation. I found myself eyeballing the traces extending from the socket, but even this was inconclusive as a lot of them are fed up from vias under the socket.

It’s given that it’ll have SSIC/USB 2.0 because almost all WWAN cards use those interfaces, but what of the others?

Fortunately there’s no need for any further conjecture because the schematics for these models are floating around the internet, so let’s answer that question definitely. 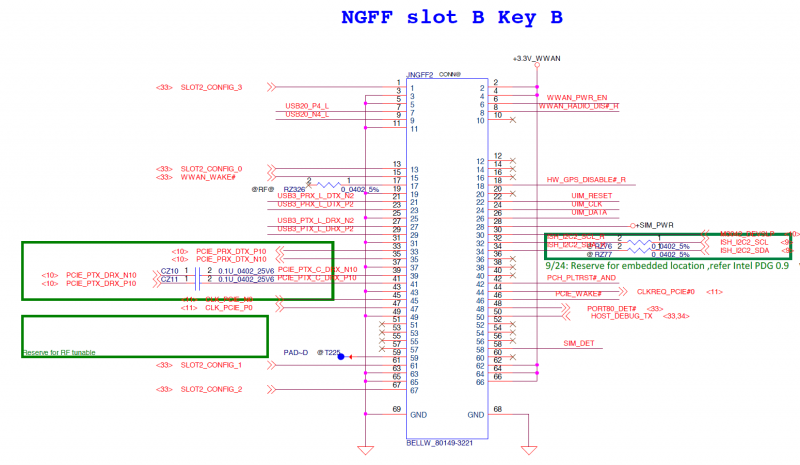 Just because we know what interfaces are there, we still don’t know what kind of peripherals will actually work. For example – if a socket can accept WWAN-PCIe – SSD-PCIe should also be no problem as the required connections are all there, however those devices will have their configuration pins tied differently, allowing the BIOS to determine exactly what’s attached.

This allows manufacturers (for example) to allow PCIe WWAN cards, but disallow PCIe SSDs. On top of that, just because an interface is there, it doesn’t mean that it’s actually enabled.

This turns out this is the case for my Dell Latitude. While the PCIe is there, it cannot be used because the port on the root complex is disabled in the BIOS, and there’s no way to enable it (without hacking the BIOS). I was able to confirm this by testing out a variety of B-Key PCIe devices, none of which were detected (even when strapped as WWAN-PCIe).

A dick move by dell, but given how rare WWAN cards requiring PCIe are, they had no reason to enable it, and my experience from owning previous models is that they’re pretty good at tying up loose ends like this.

Short of hacking the BIOS, or building a new type of USB 3.0 card from scratch, only WWAN cards will work in the WWAN slot.

Older Dell models did have SATA+PCIe in the WWAN socket, but this is not the case for more recent units. The story will inevitably be different for other manufacturers.

10 thoughts on “Does the Dell Latitude M.2 WWAN socket have the SATA interface on it?”