Recently I purchased a Plextor PX-40TSi SCSI CD-ROM drive from eBay. It was described as being in “excellent” condition and unusually it came with all of the retail packaging, manual & accessories which was re-assuring. This particular one was very reasonably priced considering that these drives, despite not having made for some 20 years now, remain stubbornly expensive – commonly fetching $50 second hand.

This is because they are commonly found in older non-PC industrial, professional audio, electronic/RF and medical equipment which is still in use and valuable, and as a result of this people still buy up these drives to fit or replace existing units. Compounding the problem there are annoying people like myself buying them to connect to ancient computers for no good reason.

This of course is all nothing compared to Plextor SCSI CD-RW Drives. The PX-W4012TS (40/10/40) still fetches an astonishing $500 price tag. A quick bit of research reveals these may be being used for vintage Akai DPS units, but that doesn’t quite seem to justify that kind of price tag. If you know anything more – please drop a comment!

My Agilent 16702B is an example of an older piece of equipment which uses a SCSI CD-ROM drive. SE drives like this one tend to fetch a higher price than newer LVD drives too for some reason.

When I unboxed this unit, I quickly noticed the plastic around and on the eject button was noticeably worn. This drive has clearly had a lot of use. I plugged it in, pressed eject and the tray came out with a horrendous grinding noise. It was also apparent that it was full of dust, dirt and even quite a lot of hair. Yuck!

Upon inserting a CD, it spun up with a terrible screeching noise, and down, and up, and down, and so on, but never managed to read a disc. I complained profusely to the seller, who immediately refunded all of my money, leaving me with this piece of junk of a drive.

With the tragic 2019-nCov outbreak in China likely to leave me without the PCBs for my next project for quite a while – this has left tech-time a little aimless to say the least. What more can one do than spend some of that time to see if I can bring this thing back to life while we wait and hope for the best. 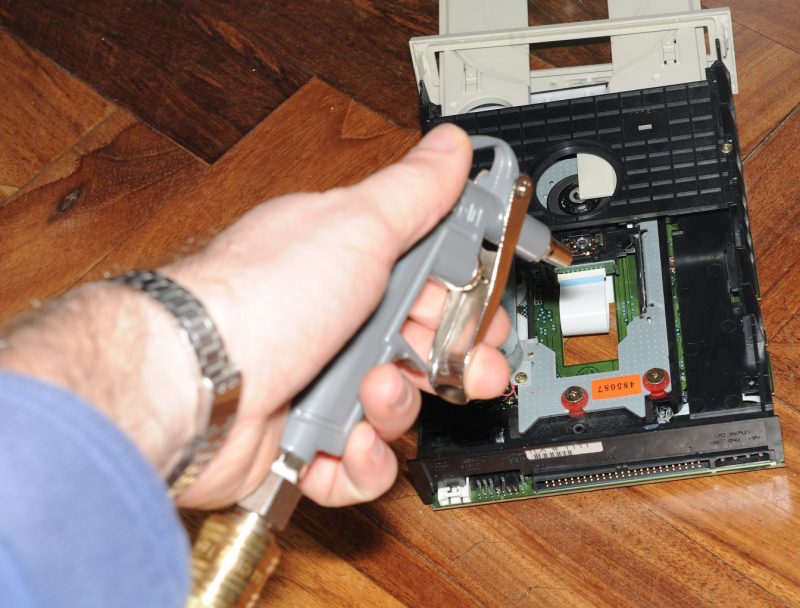 A quick blast with compressed air sorted that out. 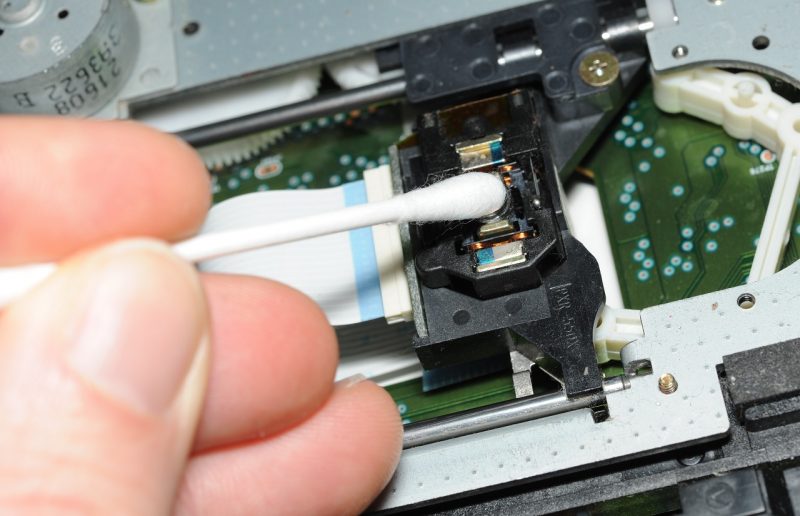 My first thought was to dab the lens of the laser with a cotton tip soaked in isopropyl alcohol. Astonishingly this fixed the problem. This trick sure as heck hasn’t fixed any other faulty optical drive I’ve had over the years. With the drive now demonstrated to be functional, we can now push on and tackle the rest of the issues. 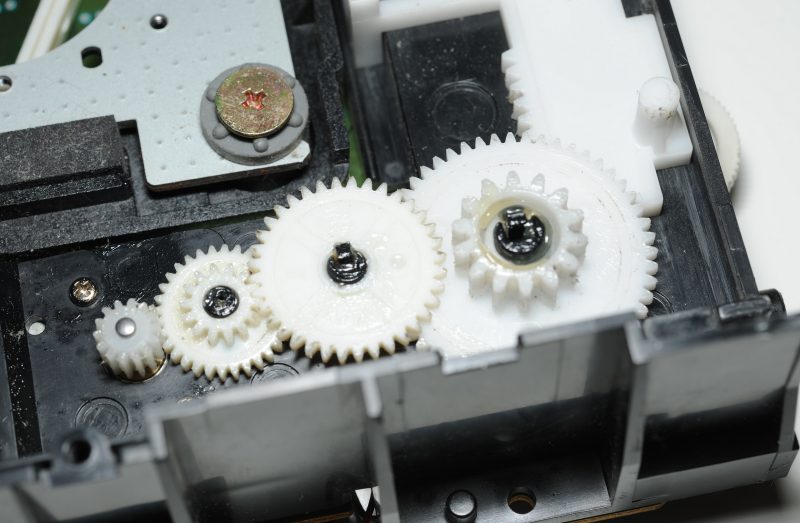 This was a nice easy one to fix. I just pulled all of the gears out, cleaned out the copious volumes of dust and other crap, re-fitted them, replenishing the plastic grease that would have been there originally.

This was going to be a little more difficult to fix. From the sound of it this was likely the bearings in the spindle motor. 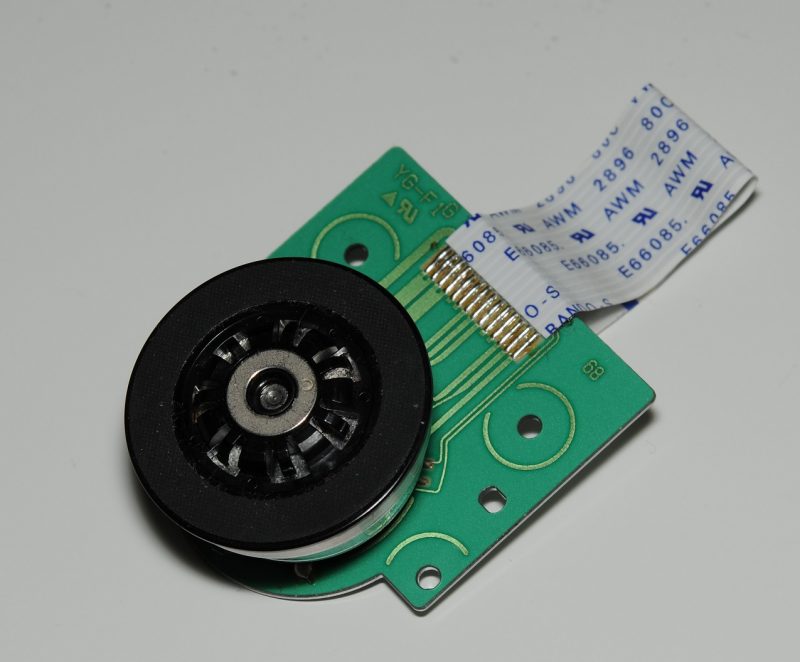 Upon removing the spindle motor assembly – a manual spin reveals that the bearings aren’t sounding very healthy. This being a Plextor drive it was fitted with two good quality deep-groove ball bearings as we would expect, but after likely more than a decade of daily punishment even those were completely knackered. Not once in my life have I seen an optical drive so thrashed as to require new bearings!

There are quite a few spindle motors for CD-ROM drives for sale on eBay, but none like this one. Bummer. We’ll have to try hammer those bearings out without destroying the motor in the process. 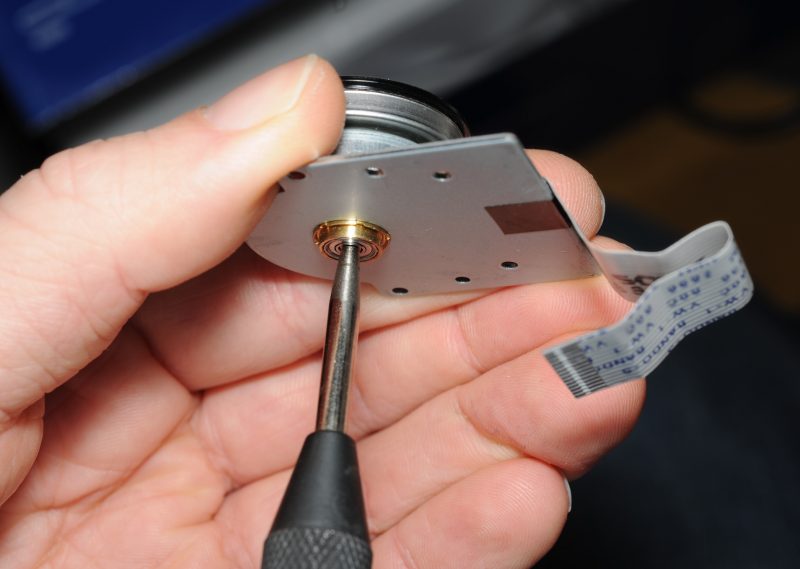 Without any other obvious ways of doing this, I just went straight at it with an automatic centre punch. After a good dozen or so actuations the spindle separated without any damage. 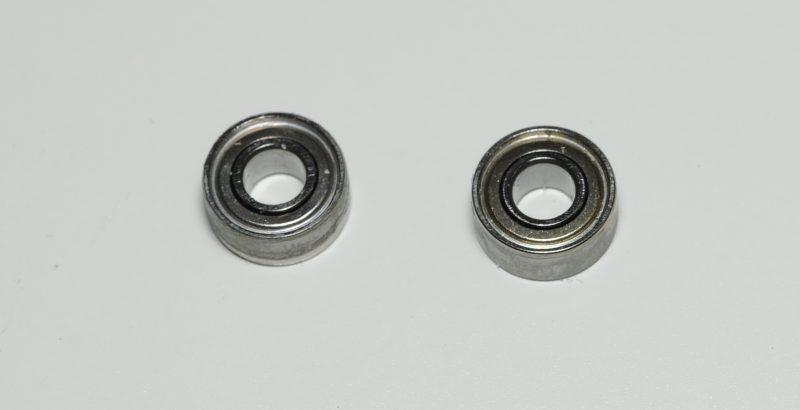 The bearings used here are 3x7x3mm in size which I was able to purchase couple of replacements of at a cost of just £2.50 each – free shipping. 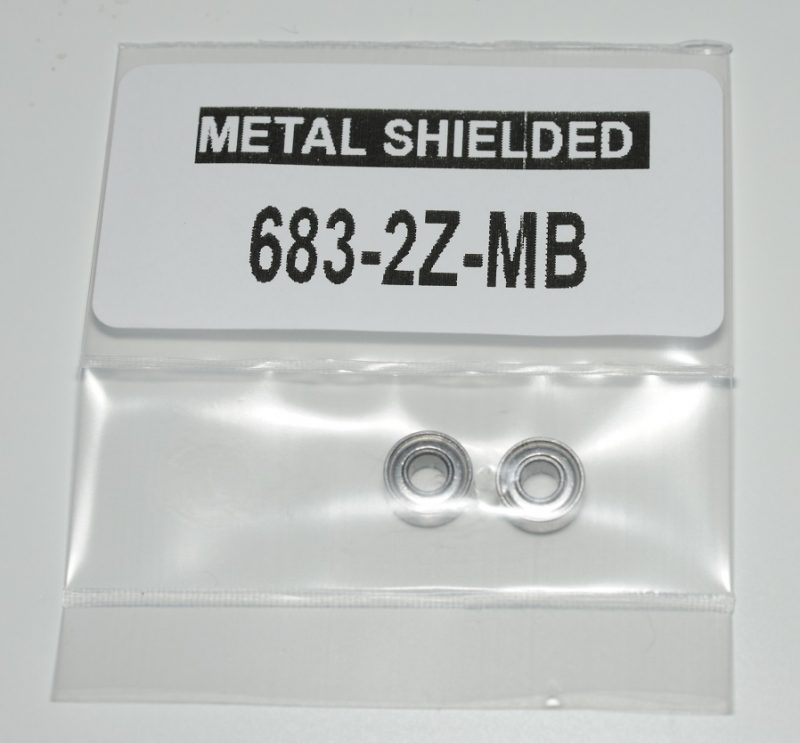 Fitting the new bearings was easy – I just dabbed a tiny bit of superglue on the brass casing – as it appears there was something gluing the previous bearings in possibly? The spring between the bearings is perhaps there to tension them correctly so perhaps this isn’t necessary. 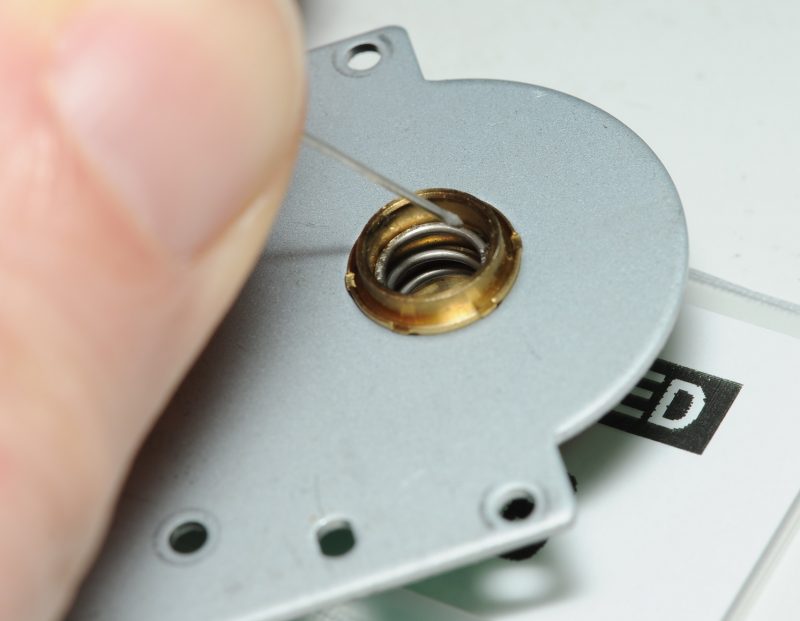 The process for re-fitting the spindle was similar, pressing from the disc side with a hex spacer this time. This took quite a bit of force. 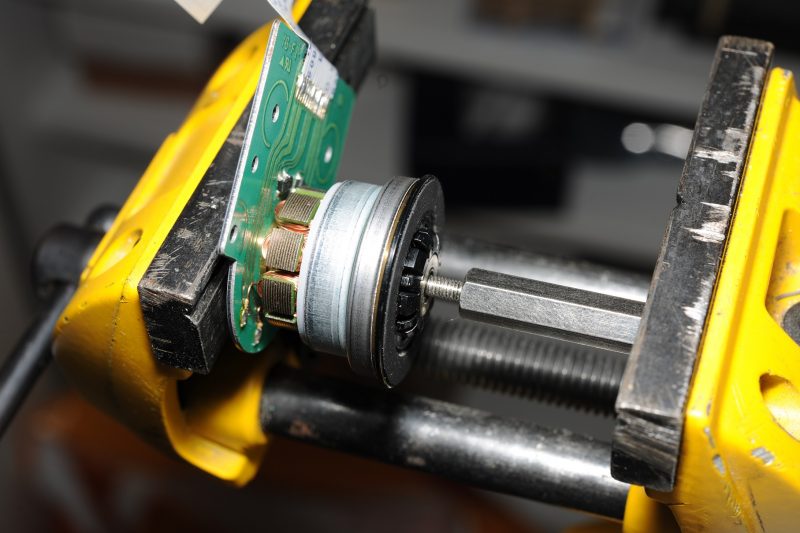 After a couple of hours of repair, I was surprised to be able to return this very tired old drive to full operation – with it now working as good as it would have done new!

Unfortunately my eBay purchased bearings aren’t amazing quality so the drive is not quite as quiet as I was hoping it’d be, but it is certainly a hell of a lot better. I think I might chuck these out and try find some better ones at some point.

The problems I have shown here were very trivial to fix but this isn’t necessarily always going to be the case. If you have any experience of repairing optical drives – I would be really interested to hear from you what sort of issues they develop, and indeed how to address them!

Recently I was looking around on eBay for an Adaptec SlimSCSI PCMCIA card – for an escapade unrelated to this post, there was of course one there for sale, for a reasonable price, but it included this lump of a CD Burner which I really didn’t want.

This happens to be one of the very earliest commercially available 2x (two-spin) units, which likely had a list price of thousands of dollars. I remember hearing about these things in the early to mid 1990s but I never actually saw one with my own eyes.

I knew someone who worked for a company who owned one – he would sneak into the room it lived in after hours to create his own music CDs. He was eventually caught, and sacked. Unfortunately his severance didn’t include the CD Burner.

I didn’t get access to anything like this until around 1999, and that would have been a much more modern 8x4x24 IDE unit which sold at a price affordable to the average person.

Anyway… let’s take a look at this beast.

The first noticeable feature is that it is a “Caddy” drive. These were common during the very early days of CD-ROMs because software CDs in particular cost a lot of money, and most people didn’t have a way to copy them, so paying extra for a caddy was worthwhile to protect the investment. Such CD-ROMs were loaded into a caddy, and left there, reducing the chances of damage to practically zero. 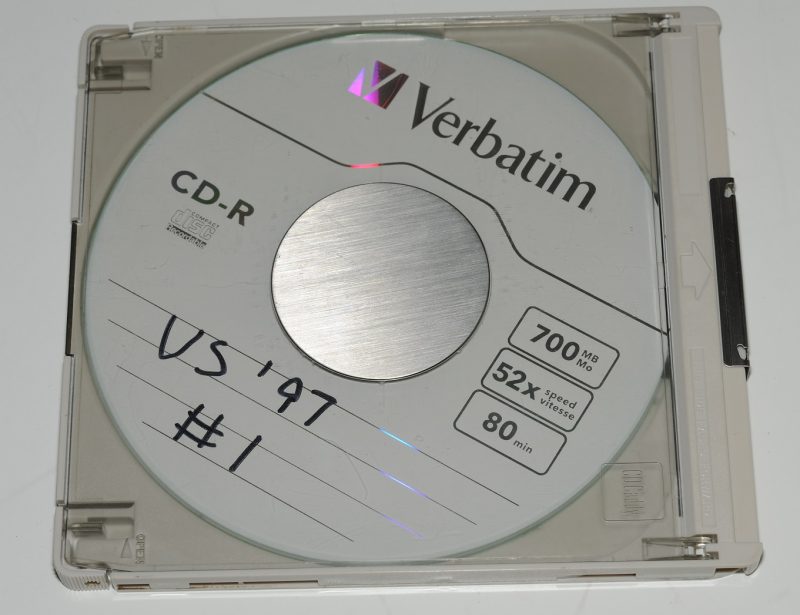 It was common for cheaper CDs to be swapped between caddies as the caddies themselves weren’t especially cheap either. In the end CD-ROMs got cheaper and all the caddy swapping just irritated people. Having a CD Burner eliminated the problem caddies were designed to solve entirely, making it a rather interesting feature for this unit.

Another interesting feature is the SCSI interface. This is because it is an external unit – early CD burners like this were typically standalone because they were insanely expensive, and moved from computer to computer as required. A PCMCIA type attachment  as I have shown would have been a popular choice as the unit could be connected to any desired laptop without having to purchase and fit a SCSI adapter to each.

The reason for the choice of SCSI over the more common IDE interface, is that IDE never had a standardised external connection mechanism (although it was possible at a pinch). There was no point in defining one because it was not hot-pluggable, and indeed the consequences of disconnecting drives during operation were generally dire. It was also an un-terminated bus, meaning it would be clobbered by signal reflections if cables were over 30CM or so. Adding additional connectors required for an external interface would have exacerbated the problem significantly.

SCSI on the other hand with hot-swapping built in from the get-go, and with its integral termination mechanism was ideal for this kind of application.

Time to take it apart… 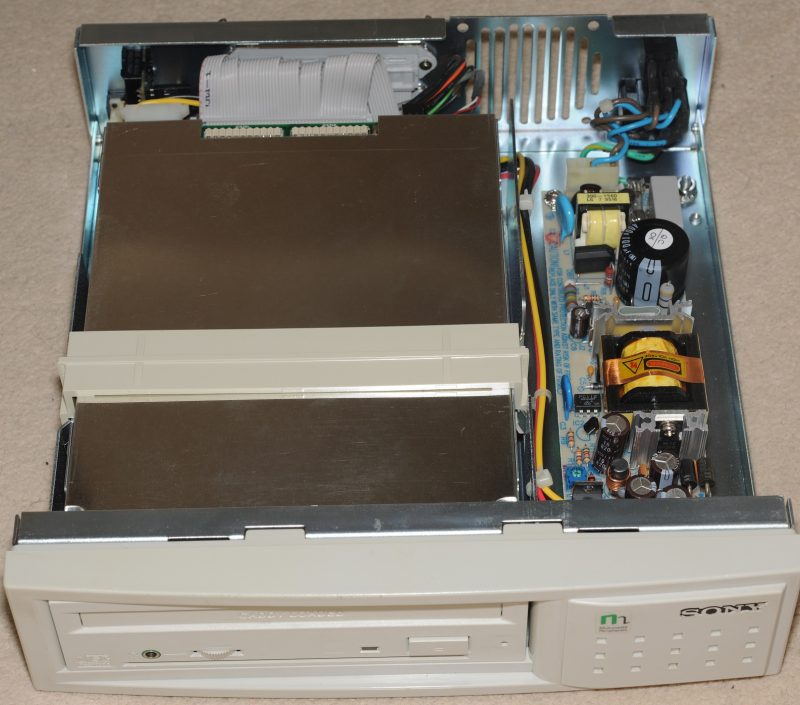 As can be seen from the outside, this is a big unit. We can see it has its own built-in switching power supply down the right hand side. Also as expected a standard form factor 5 1/4″ drive with an interesting bespoke mounting solution. Sony likely also sold this as an internal drive (CDU920S).

Next step is to pull the drive out, and open its top cover. 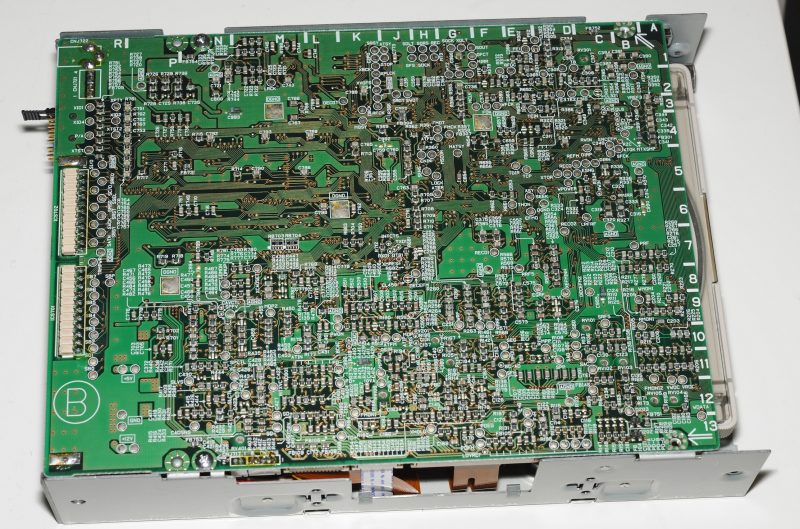 We are immediately presented with the main PCB, which has a lot of components on it. 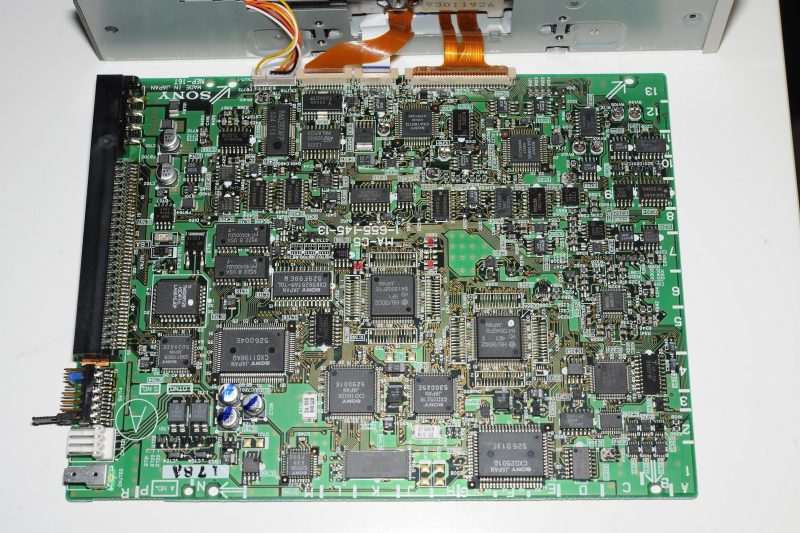 And – yup – on the other side as we would expect there is a ridiculous number of chips on it. A modern CD/DVD burner only has two or three chips at most. 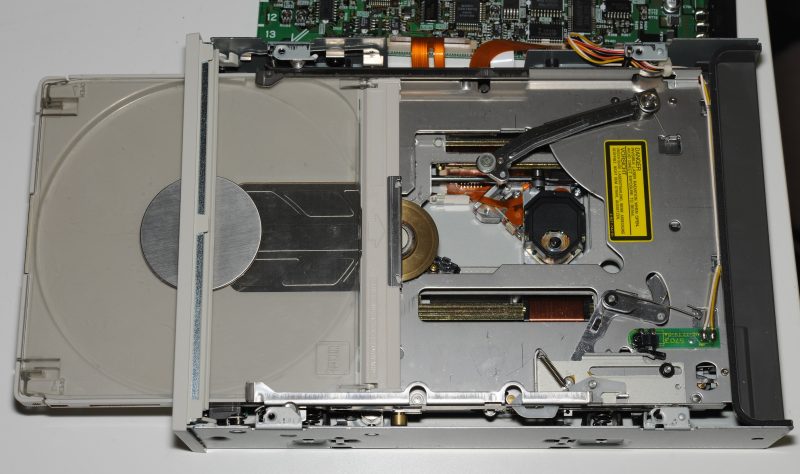 Lastly the caddy and optical mechanism. Quite a bit of extra stuff there to deal with that caddy!

Burning a CD with it

I went to the trouble of installing Adaptec Easy CD Creator 4 on an old PC to see if I could make it work. After hours of frustration I gave up.  I think it has some hardware issues – as when a disc is inserted it just makes a lot of spinning up / spinning down / clunking noises, doing very little else.