If like me you happen to have a Thunderbolt 3 enabled laptop, and are finding yourself wanting to attach arbitrary PCIe peripherals to it, you may have found yourself looking for some kind of adapter board.

You may also be aware that such items are strictly forbidden under the Intel Thunderbolt licensing programme. This is because thunderbolt chips are only sold for use on certified products. As a device like this is only part of a product, it could never be certified.

But that doesn’t technically stop it from existing. In theory this problem should go away with the upcoming release of USB4, but that may be some time away.

You may have seen one of these on either eBay or AliExpress: 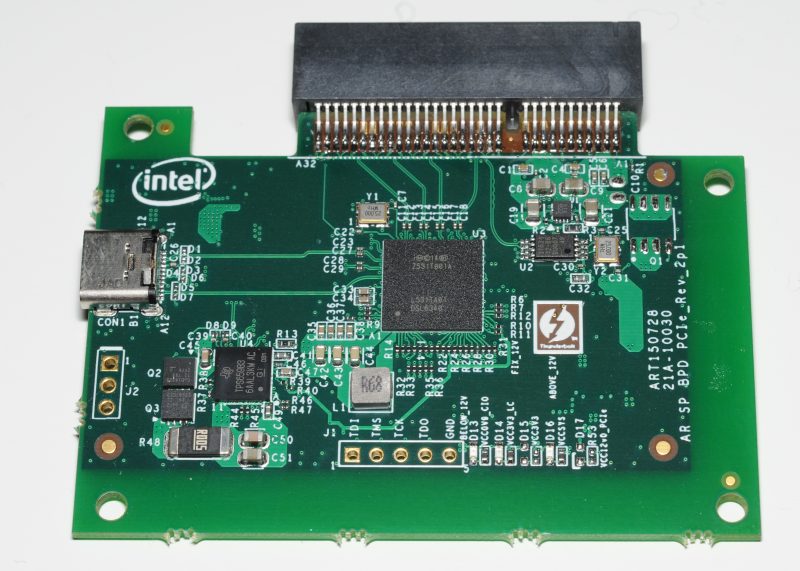 But what is it? How can it exist? It appears to have the same dark green hue and silk-screen font as an Intel reference board (of which I’ve got quite few). I’d be comfortable to say they did indeed make this.

Quite how they’ve ended up for sale is an interesting question. What’s even more interesting was the transaction its self. I bought this off AliExpress, paid in U.S. Dollar, apparently ship from China in 20 days… but…

It arrived the next day! Shipped from the Amazon UK warehouse?!

This certainly adds the the intrigue of who exactly it is that is selling them, not to mention how. The punchy price tag tells us they haven’t got an unlimited supply of them.

Sellers generally advertise them as for SSD use only. This is more because it only supplies 3.3V to the attached peripheral than anything else. Most PCIe cards also require 12V which this board does not supply. That doesn’t stop us from providing the 12V separately. 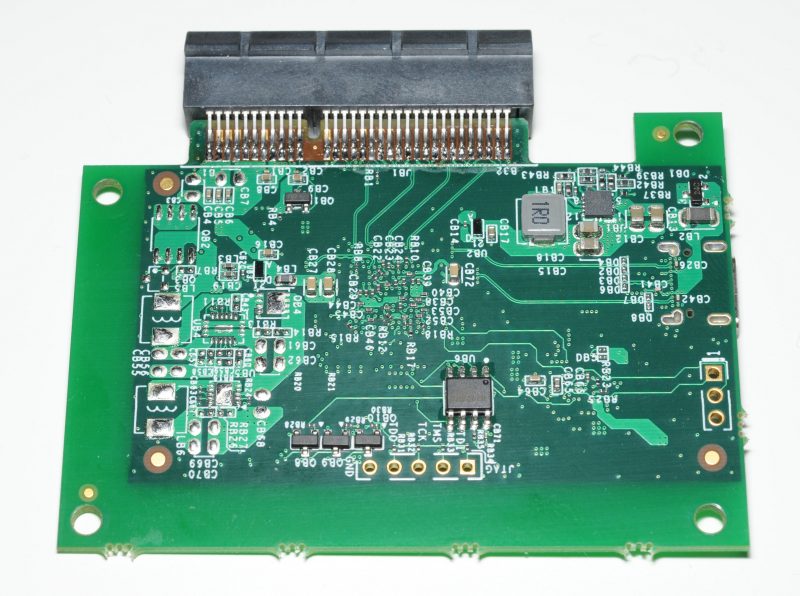 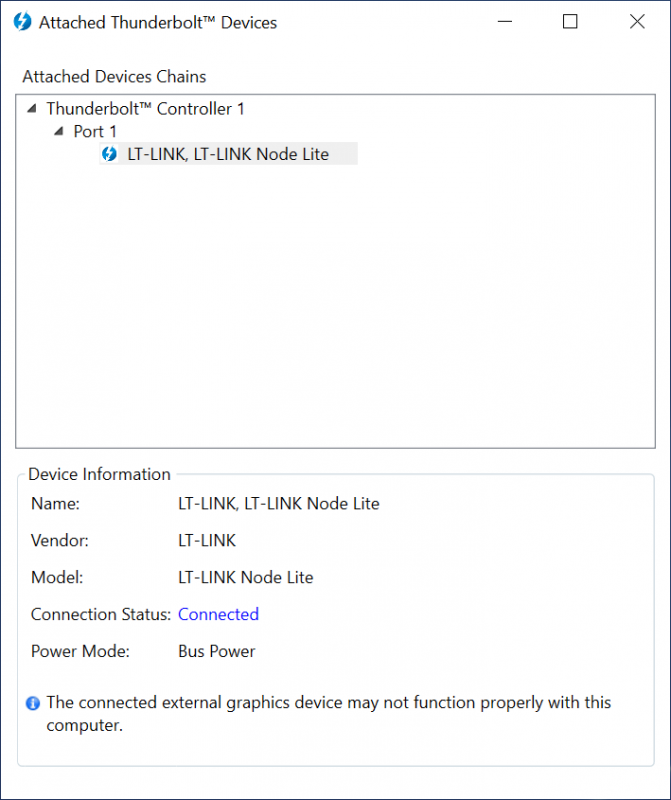 The thunderbolt info dialog describes it as an “LT-LINK Node Lite” – a similar name to the AKiTiO Node Lite. We also see the warning there about a graphics device which “may not function properly” telling us that the firmware on this board was for some kind of eGPU enclosure. 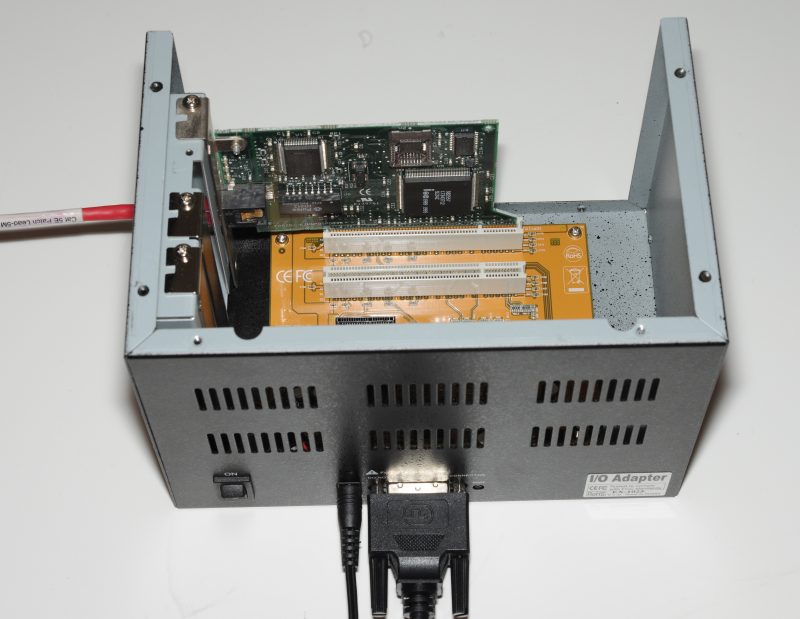 I’ll be attaching it to my ExSys PCI chassis. Fitted will be an Intel PRO/100B – a 24 year old conventional PCI adapter, which doesn’t support 64-bit DMA (nor does it have 64-bit drivers). Fortunately the source code for its driver is in the Windows DDK, so I’ve compiled it for 64-bit Windows for this test…

This test will also add another couple of PCI-to-PCI bridges onto the existing arrangement in the Thunderbolt chain. 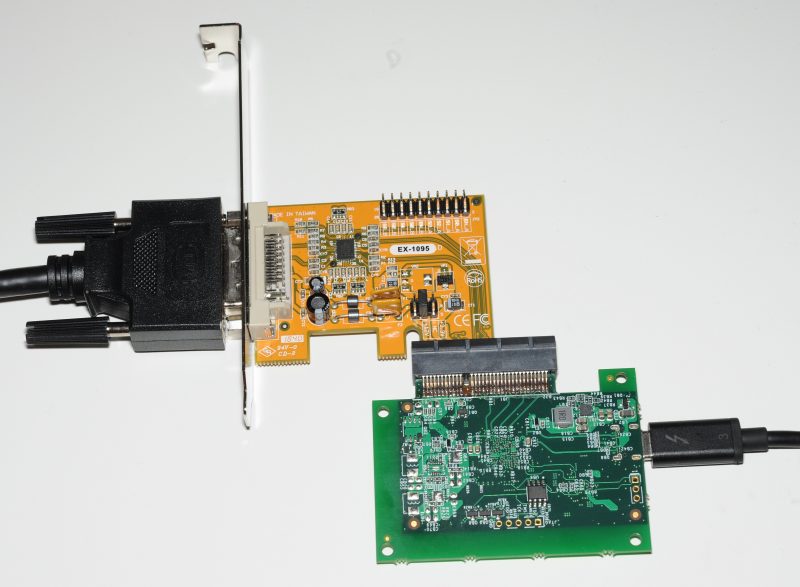 The chassis is connected to the Thunderbolt adapter via the PCIe card option.

Even with a long chain of bridges,  a transition to conventional PCI, and the rather legacy nature of what I’ve attached – it works, and passes traffic.

So there we have it. You can indeed use peripherals other than SSDs on these!