We’ve all heard that they’re different (somehow?) I thought this was going to be straight forward, turns out I was wrong.

Before we get into the details, we need to define what exactly an “AMP” plug is. In the first instance an AMP connector is made not by AMP, but CommScope. The AMP company was dissolved many years ago and its products have gone through various rounds of divestment and acquisition. Other brands this type of connector has been sold under (historically) are “Tyco” and “TE Connectivity”.

Non-AMP plugs are generally referred to as Stewart Stamping (SS) or Western Electric (WE) Style.

The second thing to consider is that eBay is awash with counterfeit products described as AMP plugs, but are not the products of any of the aforementioned suppliers, nor are they even physically similar to the genuine articles. Most of these are low quality SS/WE style plugs, and should not be used with AMP tools.

There are two distinct varieties of “AMP” (ish) connector.

Since you are here because of differences in tooling, let’s get straight into that. It turns out that these two require different tools: 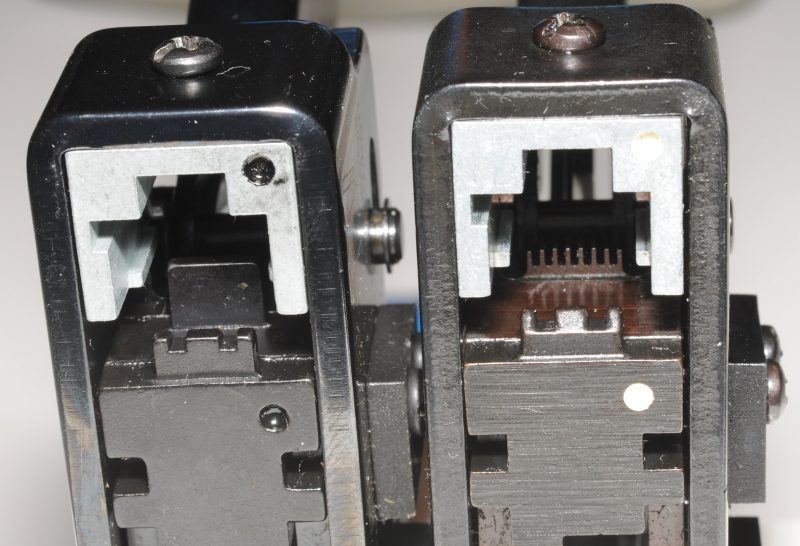 Which one is the fabled “AMP” connector? Both varieties are quite different to regular SS/WE plugs, however from a tooling perspective, the “black dot” tool for “Line” style plugs is significantly different. It is this type which other manufacturers sell tools labelled as “AMP” style.

When we look at the “black dot” die next to the one from the Stewart tool, the difference is clear. There is a third punch-down in the centre which crimps part of the plug onto the stripped wire, a feature that no other type of plug has. Because of this, you cannot use this tool to crimp most SS/WE plugs.

As for the “white dot” tool and associated “high performance” plugs, they’re not exactly the same as SS/WE plugs and associated tools but I’ve found that they are more-or-less interchangeable – I certainly could not see and problems with mixing them.

Not a great result, and unlikely to work very well.

But wait! Some non-AMP plugs are actually sort-of compatible with the “black dot” tool

I would’t be making a habit of this. As we can see the wire has been damaged by plastic being squashed by the middle punch-down. Not recommended!

If you care enough to read on…

On the left is an example of one, and on the right we’ve got the bog standard alternative. Please excuse the rubbish bit of wire I’ve used here.

In the case of the “high performance” plug the cable is butted right up against the terminals, meaning that there is only a minuscule amount un-twisted cable, whereas the plug on the right has quite a lot.

When we’re running long distances or at 10GbE this matters, but not in any other case.

Some (line type) 8P8C AMP plugs crimp onto the cable at 3 points, whereas the rest crimp at 2 points.

I have only seen one other connector type which crimps at 3 points (also originally an AMP specific type – now CommScope) – a special variety of 6 position “long” modular plug which has the lengthwise dimensions of an 8 position plug.

These are normally used where a shielded 6 position type is required. Even without this requirement – if you are using 6 position plugs regularly these things are a heck of an improvement over the standard type. They fit standard 6 position sockets, crimp very easily onto round cable, and the longer dimensions and tab make them a lot easier to connect/disconnect.