It was only a matter of time before I was going to own one of these. Having used the 16700A on the job more than 10 years ago, it was one piece of kit I never forgot the enjoyment of using.

It also was inevitable that it’d be an 1670X that I’d go for, not for cost reasons, but to some extent. The affordable 16900’s are clapped out old Pentium III based units that won’t go to anything newer than the ancient Windows XP. This HP-UX based unit on the other hand, is timeless.

One of the first jobs: Replace that flaky, slow old SCSI hard disk with something a bit more modern. As no one has demonstrated any kind of practical (and cost effective) SSD solution for these units yet, I’m not keen to go splashing out on an expensive SCSI to SATA adapter which’ll be unlikely to work. The best hard disk option for repairers appears to be using SCA Ultra320 hard disks from old servers. They’re inexpensive, good performing, large and plentiful.

But first there is an annoying problem: Mine being one with the built in CD-ROM, the hard disk is mounted the opposite way to CD-ROM less units, and the offset of the connector with adapter on the incumbent disk arrangement makes it almost impossible to fit the SCA disk with adapter without slashing up the metalwork, or rebuilding the large SCSI ribbon cable, so I’ve had to make up this little “offsetter” cable to deal with it easily. 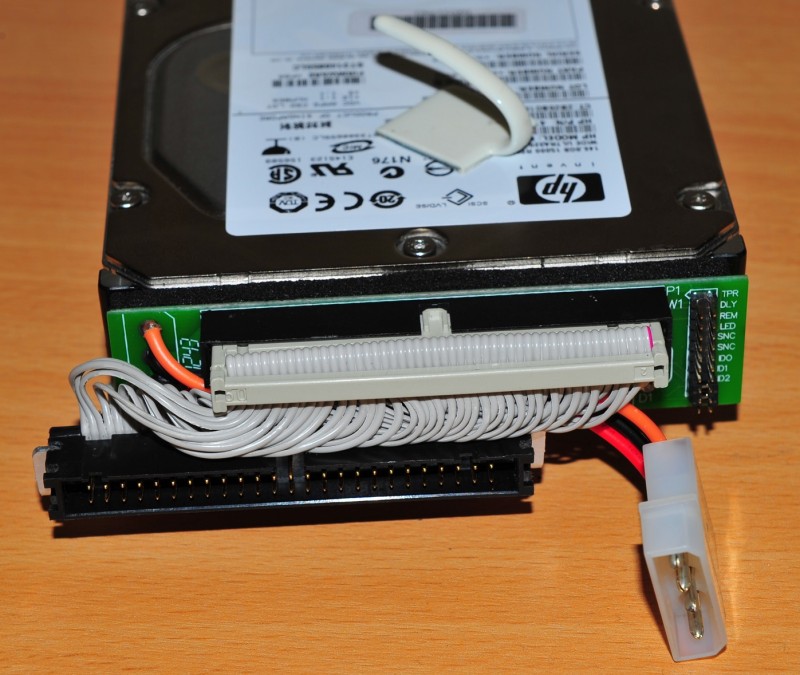 And here it is back in the LA 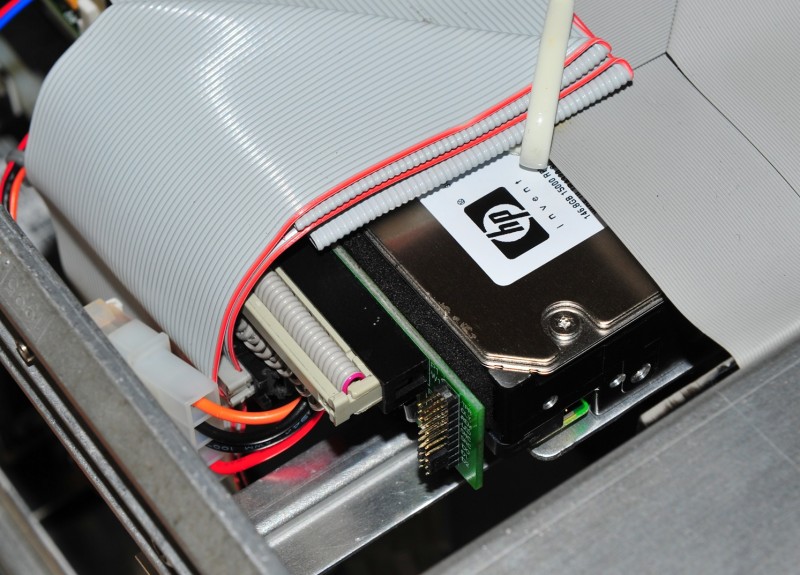 During the re-install I found that the installer just couldn’t seem to cope with the 146GB drive I had installed. I don’t think it’s completely impossible but the LVM configurator is hard coded to always use the whole drive, then complain that it’s too large for the bootloader to boot from. In the end I copped out and installed it on another 9.1GB disk and DD’d it over to my new drive. The bootloader doesn’t mind massive drives, just so long as the root VG doesn’t span its entirety.

I’m not sure where the line between ‘works’ and ‘doesn’t work’ is in terms of disk size, but can confirm that a 73GB drive works, whereas 146GB doesn’t. Maybe 128GB is the maximum?

To transfer the smaller partition set onto the large drive was easy. I simply attached both drives to the analyser at once, boot into the recovery shell from the install CD-ROM and run these commands:

That took about 5 hours. Note here that SCSI ID 5 is the old 9.1 GB disk I just installed the OS on, and ID 6 is the newer 146GB drive. This had the disadvantage that I’ve wasted most of the drive, but it’s not like it’s ever going to be needed, and only using less than 10% of the drive has considerable performance advantages as the heads barely ever have to move a millimeter to boot the LA.

The upgrade was definitely worth it. With the old drive radiating enough heat to cook a steak, and producing the sound of a hundred maracas in a washing machine, this new drive is cool quiet and a lot faster. It’s now more responsive, and also boots about 15 seconds faster than before. It’s just a shame the rest of it makes a noise level somewhere between a hovercraft and a jet engine.

While I had the unit open – I took the opportunity to photograph two rather sought after but difficult to obtain items:

This is one tremendously exotic bit of RAM. It is similar to the memory found in old HP-UX workstations which had between one and four 64MB memory modules, but this particular one is a completely logic analyser specific pair of 64MB modules on a single 128MB PCB, despite the system reporting it as two 64MB upgrades.

Sadly these memory upgrades are only feasibly obtainable with a unit that was sold with them. Keysight apparently have some stock of the above upgrade, but with shipping and administrative charge, it’s cheaper to just buy a used Option 003 analyser, pinch its ram and throw it away.

Even more difficult to come by is the video memory upgrade, which increases maximum resolution from 1280×1024 to 1600×1200. So far as I can tell this upgrade is effectively useless as it will only output 1600×1200 @ 75Hz which no LCD monitor will accept, as 60Hz is the maximum refresh rate for all LCD panels, unless the monitor happens to have some kind of intermediate buffering mechanism which I am unaware of any examples of.

Interestingly though there is a “user defined” display mode which I hoped would allow entry of a modeline or EDID but thus far I have not found any interface to configure it.

The best way to use this Analyser appears to be the same way that I did on the job all those years ago: Remote X11

I was a little disappointed to find that after logging via Telnet using the “logic 192.168.0.x:0.0” format, that nothing happened? I don’t remember remote X11 being a difficult thing to use on these units. After trying all sorts of X servers, nothing worked at all!

In the end, I followed this guide, got a shell on it, reset the password for the secret “hplogicz” user.

to get into single user mode.

Once you have a command prompt, you can use passwd root to change the root password.

In my case I wasn’t interested so much in resetting the root users password (but what the hey, why not) – but instead the hplogicz user which is already in place for this kind of use.

– and then reboot the LA, logged in via telnet with this account and started the logic analyser application manually with the following commands:

So it appears that on mine, the program that normally is supposed to start the remote session (/usr/sprockets/bin/sessionWrapper) wasn’t working, but can be manually fudged around by starting vp the old fashioned way.